International Day of Sport for Development and Peace observed by St Lawrence H.S

Students of St Lawrence H.S observing the International Day of Sport for Development and Peace at school campus

About 2,000 school childrens holding white cards formed a smiley at the school ground as a symbolic gesture in support of IDSDP. A huge placard with message “#WePlayTogether” was on display.

The objective for organizing such an event was to make the school children aware of the fact that sport can be used as a tool to foster development and peace. Children at a very young age need to be introduced to how sports can benefit our society and help peaceful coexistence, and people from an early age should understand the value of fair competition in sports as a means to form responsible citizens.

Speaking about the initiative, Father Sebastian James SJ, the principal of the institution said, “We at St. Lawrence got all our 2000 school students come together on the field, forming a smiley. Primarily it was awareness about sport for peace, happiness and development. Sports bring s out the best in any individual irrespective of their caste, colour and creed.”

He further added, “Sports play a huge role in today’s world in getting us all united. We all remember how Luz Long (German athelete) helped Afro-American runner Jesse Owens win the gold in the 1936 Olympics in Berlin.”

The alumni St Lawrence Old Boys Association has been the brainchild for organizing such an event. In a bid to create awareness among the school children’s on sport and peace, the SLOBA has conceived the idea few months back.

“One good sign for organizing such an event is to bring together the former and present students. We hope that some of these kids might be motivated enough to do something big for this beautiful movement of peace and development through sports when they grow up,” said Mr Subrata Sadhu.

On 23 June this year the school in association with SLOBA will host a drawing competition “Expression 2017” to celebrate Olympic Day, with the theme ”Olympic Games and Peace”. The logo for “Expression 2017” was revealed during IDSDP celebrations.

Historically, April 06 is one of the most important days in sport. It was on this day in 1896, the first modern Olympics were held in Athens.

Appreciation received from Peace and Sport for organising IDSDP 2017 in  St. Lawrence High School on April 6, 2017 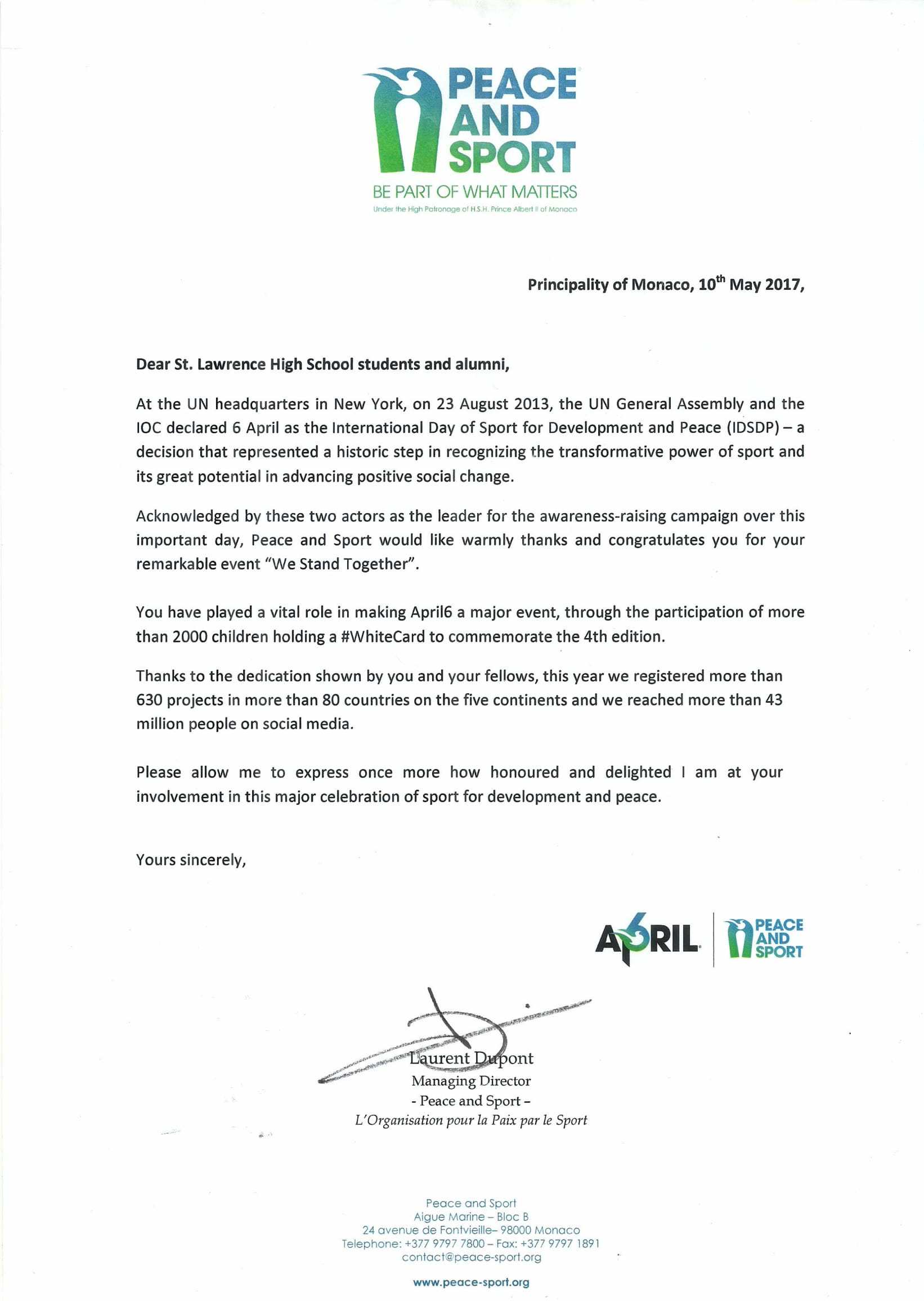 NOTICE FOR STUDENTS OF CLASS 10

NOTICE FOR STUDENTS OF CLASS 9

NOTICE FOR THE DISTRIBUTION OF HIGHER SECONDARY MARKSHEETS AND CERTIFICATES 2021

MESSAGE FROM THE PRINCIPAL

NOTICE FOR PROMOTION TO CLASS 12

NOTICE TO THE STUDENTS

NOTCE FOR CLASS 10 STUDENTS AND FORMAT FOR NOC